There are enough foreign tourists to Thailand, and enough Thais spread over the world, that morlum music (sometimes transliterated as molam or morlam) has become a known quantity to connoisseurs of the strange, beautiful, and obscure. The popular music originates from  Isan province, in the northeast near Laos, and is considered to be the ‘heartland’ music of Thailand. Youtube has many, many, morlum videos, most uploaded by Thais, which can offer a nice introduction to the current state of the music’s form.

However, there was a Golden Period when the music first emerged in which musicians mixed traditional instruments with electric rock instruments, often with analog synths or funky horn sections. Purists say that with the advent of the digital keyboard/drum machine, the music lost some of its magic and it is true that it now seems to have become mechanical and formulaic.  The analog synths and horns and traditional instruments have largely been supplanted by MIDI-based replicants that offer the energy but not the resonance of the older style.

Last year, I was lucky enough to score some 45rpms from the Golden Period in the main market of the town of Nong Khai, in north Thailand.  The people of the town actually use the market to buy daily goods and supplies—everything from blankets to electronics to clothing to food. There are also stalls selling odd-ball junk and knick-knacks for tourists. Stretching in a sinewy conglomeration of buildings that snakes along a boardwalk by the Mekong River, Laos on the opposite shore, the market presents a kind of sensory immersion that teeters on overload; funny smells and the press of sweaty bodies and the chatter of incomprehensible voices and the kaleidoscopic colors and shapes of all the goods for sale.

The record seller, like so many of these guys, was running a small stall selling vintage electronics along with records and tapes—the playback mechanisms for the archaic storage. I wish I could have bought his entire stock of vinyl but I was travelling by train with only a backpack and didn’t trust the Thai post to send stacks of rare vinyl to California intact. In the end, I bought about a dozen 45rpms.

Links to youtube videos of some of these tunes are below. I don’t speak Thai and don’t have easy access to translation right now so unfortunately these uploads lack the expected scholarly information about artists and bands and labels. I plan in the future to come correct on the research, but in the meantime, the tunes can be enjoyed on their own merit.

(If this stuff really works for you, check out the Sublime Frequencies double lp release , Molam: Thai Country Groove from Isan.)

Kansas City Confidential, Phil Karlson. It’s the 1950s noir film that set the standard for all that came after, from LA Confidential to Reservoir Dogs: the tense dialogue, the brutal violence, the dog-like male competition, the obvious sets, the chiseled character actors, and the staginess of the directing all somehow add up to an adrenaline shot that leaves you reeling. The denouement is disappointing and the optimism of the happy ending feels tacked on, but before the final minutes you’ll experience post-war American noir at its atmospheric finest.

Eagle-eyed fan sent this in… apparently the books now come in shrink wrap.

Good idea to use a prophylactic before you handle my junk…

Dust to Digital: Longing for the Past 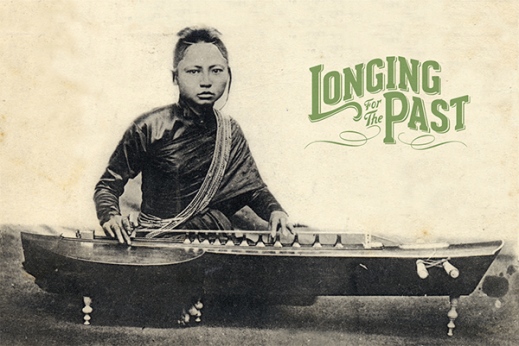 The good folks over at Dust to Digital have a new release, Longing for the Past: The 78rpm Era in Southeast Asia that looks phenomenal. The ‘curator’ of the collection is David Murray–not the jazz player but the man behind the Haji Maji blog.

Dust to Digital has released some amazing stuff and it demonstrates a type of business model that could only exist in the Internet age. As the name implies, their raison d’être is to recover, preserve, and redistribute old vinyl from across the world. Their CDs and box sets are not only lavishly produced but curated by collectors who straddle the line between scholarly specialist and obsessive pack-rat. With an obviously limited market–this practically redefines niche interest–they operate as a boutique record label. Without the funding or support of a major university or quasi-government institute (à la, the Smithsonian), this boutique website business model might be the only way to accomplish their given project…which to my mind at least, is immensely valuable.

Check ’em out and support the ongoing goodness!

I bought a big stack of Arab music 78rpm records at the Old Airport Souk in Jeddah, KSA. The store was the type of dusty junk emporium that I love the most because usually there’s a big stack of records in the back and the storeowner has no idea what they are or what they may be worth.

The junk emporium in Jeddah was no different. It was a long shop in an old travel agency; ‘railroad style’ as they call it in New York, long and narrow, like a Pullman car. It sat across from the abandoned airport, on a traffic circle on which was mounted a fitting centerpiece: an orange Beechcraft Model 18 plane, its belly embedded in concrete, pointing toward the sky.

The junk store had no sign and no name: its location was indicated by two men sitting in broken down club chairs, smoking and watching the evening traffic pulsing by the front entrance.  There was no door, just a roll-down gate that was locked during the day—the building, indeed the entire block, looked abandoned in the noonday sun when I had tried it before.

Past the rusting swords and display cases filled with dusty jewelry and other trinkets, at the back of the shop, I found the stacks of vinyl. Unfortunately it was mostly Western pop but I did find some badly worn 45rpms of Arabic music. The proprietor, a monkey-faced man in checked polyester, thin and weathered like one of his desert treasures come to life, spouted several times ‘music Araby! music Araby!’ In bad guidebook Arabic I indicated that, yes it was music Araby that I was after, and did he have any more?

He led me back through the narrow show through a half sized door in the back wall (I had to duck low) into a storeroom lit by a single bulb that hung straight and naked from the low ceiling. The floor was covered with mouse dropping, the air felt dry and toxic, but there on the floor, beside mounds of decaying newspaper and prayer books and rodent gnawed postcards of the Ka’aba, was a cardboard box of 78rpm records.

They had soaked at some point—perhaps while sitting in that very spot—and the sides of several were caked with a thin coating of mud. Many were cracked or ‘bit’, that is half-moon shaped chunks were missing from the outer edge, like bites from a cookie, a typical hazard with brittle 78s. I pulled out all the intact specimens and we made our way to the front counter.

Now there certainly cannot be that many white men in the Hijaz who venture into the old quarter alone after dark just to dig around in filthy junk stores looking for 78rpm records. The proprietor knew he had a collector at his mercy. We went through the stack, dirty platter by dirty platter, and negotiated the price of each item—like we were at the diamond counter at Tiffany’s. In the end he stung me for twice what I wanted to pay, but after we agreed a price, he very kindly not only rinsed then gently patted dry each record, but carefully wrapped each one in newspaper. Then he relieved me of the better part of my cash roll. Surely I paid his rent for the month—assuming he pays rent.

Each platter was worth the price but there were four from Yemen on a label called Aden Crown Records that for me at least were the most revelatory. The music of the Red Sea, the mingling of African drums with melodies plucked on Mediterranean stringed instruments, the chanting quality of the vocals taken from the call to prayer, is most vivid on these albums.

The label itself is somewhat mysterious and I can find no information about it online, at least not in English. As you can see from the videos, there were both black and blue labels. The stickers say ‘British made’ but the music was most likely recorded in Aden, which was a British-held port at the time.

If any one knows anything about Aden Crown Records, please let me know.

In the meantime, enjoy this amazing music. Here are the four records as they appear on my youtube page:

[correction] Just realized that I had the contents of a fourth Aden Crown Record with me here in Indonesia so was able to upload that video as well. The album sticker is very well preserved on this one, too, so all the text is visible.

Tobias Lindholm. 2012.  I don’t normally watch psychological thrillers largely because most that I have access to are Hollywood swill featuring artificially beautiful people artfully placed in artificially distressed situations in which they act artificially; that’s not entertainment, it’s industrial product. Thankfully the Europeans still know how to make movies and this one lives up to the promise. We have actors who can act who look like the type of character they are playing. We have outstanding editing, cutting between the horror of the hostages broiling in the equatorial heat and the glacial coolness of the executive in Denmark negotiating for their release (while reaching his own boiling point). And we have hubris by multiple parties—only European filmmakers can handle hubris so compassionately because they recognize it is part of the human condition (Hollywood hides from it or shuns it or punishes it). And the film is actually a nail biter: since it isn’t Tom Hanks or Brad Pitt or any other famous face, we actually don’t know who will make it out alive at the end. The dialogue is mostly English (the international language of hostage negotiation), and though the Danish is subtitled, very cleverly the Somali dialogue is not, which adds to the realism of the terror. Having a skinny wild-eyed boy waving an AK-47 in your face while screaming in a language you don’t comprehend…for me at least that cuts close to the bone.

At Kinokuniya bookstore in Singapore 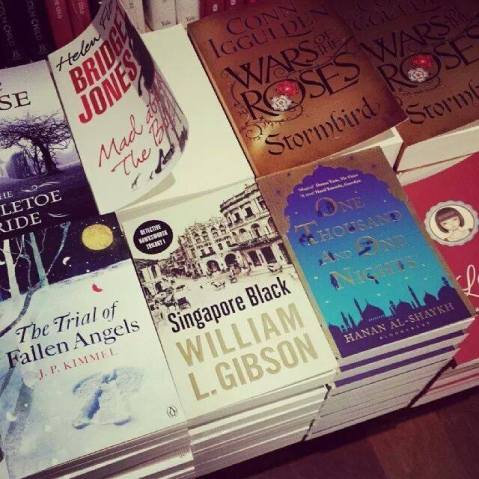 In the stacks at Kinokuniya!

drgdirectsupreme
Create a free website or blog at WordPress.com.